Terminal is just a secondary, yet interesting element of the game. It’s one of our ways of how to deepen game universe, provide players with new information about a world and maybe even entertain them. So we came up with this game medium, which combines several functions. These not coincidentally resembles media, as we know them today – especially Internet. You can find here news and events from the game world, which can also reflect your deeds.Terminal then will gradually update these reports, as you’ll progress in the game. Another function here is Benjamin’s email, which is primarily used to direct communication with main character – you can find here various of messages, hints or some quest assignment. Email is accompanied with fictional social network called Mutter – where you can find information about other NPC’s actions.

You can find several of these terminals in game world. Other characters will use this medium, same as Benjamin. You can then get to very interesting information, if you can get to their accounts. 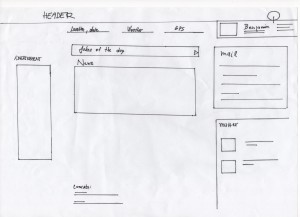 As I said before, terminal is not only important source of information, but also reference to actual media and their flaws (advertisements, spams, not-so-much-true news etc.). We considered this approach when we draft it – we wanted to combine simple and clear interface, where will player learn all about the story, and which gives plenty of space for deepening of the universe.

You can see here the final design in the game, which follows previous sketch. We chose a simple sci-fi design, which matches to the game style, while it doesn’t distract attention from displayed information. As you can see, we chose similar solution for our web site.

That’s all about terminals. Thanks for your support.

Tags: developer, game development, hacking, mutter, story, terminál
Social
Share and visit our page on social networks. It will help very much!
Google+
About us