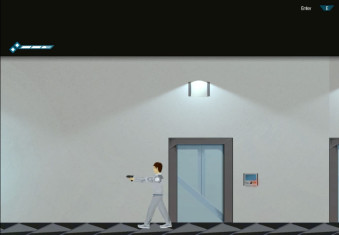 In one of our last articles we mentioned one crucial ability – teleportation. Although teleportation is considering as the most interesting tweak of game, we can’t omit another abilities. It is laser and shield.

Laser represents long distance attack for player. In the story of our game laser weapons represents primary weapon arsenal – for its effectiveness and efficiency. Player will find his first pistol in the begging of the game. It doesn’t need ammunition, but it needs energy. It will take energy from energy bar when you shoot. Energy bar is recharging. You must watch out and shoot surely, because after shooting you will lose energy. It can be a problem in case of enemy dominance. You can upgrade your weapon throughout the game – change cadence, power and distance (which will cost adequate energy)

On the other hand shield is important type of defense, which can save you your life. Character will make an energetic shield after pressing relevant button, which can stop few enemy shots and it can give you time for choosing another actions (shooting or running). This shield will cost you energy. Shield effect is limited by endurance (how many shots it can hold up) and also time (it can exist only some time).

As you can see, every basic ability is bound by energy. This easy system force player to consider his choices and to use best process. Will you rather store energy to fast teleportation and to run from enemies? Will you cast shields and little by little shoot enemies? Or will you keep some energy for shooting? The choice is up to you.

Tags: game mechanisms, laser, shield, video
Social
Share and visit our page on social networks. It will help very much!
Google+
About us